In lab2, we implemented a Batch-Processing OS, allowing users to submit a bunch of programs at once then just wait for the result(s). Besides, we have made some basic security checks to prevent memory fault(or attack) in user’s programs influencing the other ones or OS. Despite the large labor-saving, it is still a far cry from a modern OS.

Think about how the OS behaves nowadays: Multi-tasking(you feel like doing many works at the same time), Real-time interaction(whenever click or press a key you get responses instantly), Memory Management, I/O Devices Management, and Networking utilities. It is those features, supported by complicated underlay mechanisms, that let us operate computers in a satisfying and efficient way. And in this lab, we are going to address the Multi-tasking problem, which takes an essential step towards our modern OS target.

The basic idea of multi-tasking on a single CPU is very simple: we run each task for a small piece of time, then switch to the next task and repeat this procedure. If we switch fast enough then it looks like we are running many programs at the same time.

In the following parts, we will discuss these problems, one by one.

The way applications are loaded is also different from the one in the previous chapter. The loading method explained in the previous chapter is to have all applications share the same fixed physical address for loading. For this reason, only one application can reside in memory at a time, and the OS batch submodule loads a new application to replace it when it finishes running or exits with an error. In this chapter, all applications are loaded into memory at the time of kernel initialization. To avoid overwriting, they naturally need to be loaded to different physical addresses. This is done by calling the load_apps function of the loader submodule:

The Concept of Task

Again, we see the familiar “pause – resume” combination. Once a control flow needs to support “suspend-continue”, it needs to provide a mechanism for switching the control flow, and it needs to ensure that the program execution continues to execute correctly before the control flow is switched out and after it is switched back in. This requires that the state of program execution (also called the context), i.e., the resources that change synchronously during execution (e.g., registers, stacks, etc.), remains unchanged or changes within its expectation. Not all resources need to be saved, in fact only those that are still useful for the correct execution of the program and are at risk of being overwritten when it is switched out are worth saving. These resources that need to be saved and restored are called Task Contexts.

Design and Implementation of Task Switching

The task switching described in this section is another type of abnormal control flow in addition to the Trap control flow switching mentioned in Chapter 2, both describing switching between two control flows, which, if compared with Trap switching, has the following similarities and differences.

In fact, a task switch is a switch between Trap control flows from two different applications in the kernel. When an application traps into the S-mode OS kernel for further processing (i.e., it enters the OS’s Trap control flow), its Trap control flow can call a special __switch function. This function is ostensibly a normal function call: after the return of the __switch, execution continues from the point where the function was called. But there is a complex control flow switching process hidden in between. Specifically, after the call to __switch and until it returns, the original Trap control flow A is first suspended and switched out, and the CPU runs another Trap control flow B applied in the kernel. Then, at some appropriate time, the original Trap A switches back from one of the Trap Cs (most likely not the B it switched to) to continue execution and eventually return. However, from an implementation point of view, the core difference between the __switch function and a normal function is simply that it switches stacks. As the Trap control flow prepares to call the __switch function to bring the task from the running state to the suspended state, let’s examine the situation on its kernel stack. As shown on the left side of the figure above, before the __switch function is called, the kernel stack contains, from the bottom to the top of the stack, the Trap context, which holds the execution state of the application, and the call stack information left by the kernel during the processing of the Trap. Since we have to resume execution later, we have to save certain registers of the CPU’s current state, which we call Task Context. We will describe which registers to include in this later. As for where the context is stored, in the next section we will introduce the task manager TaskManager, where you can find an array of tasks, each of which is a TaskControlBlock, which is responsible for storing the state of a task, and the TaskContext is stored in the TaskControlBlock. At kernel runtime we initialize a global instance of TaskManager: TASK_MANAGER, so all task contexts are actually stored in TASK_MANAGER, which is placed in the kernel’s global data .data segment from a memory layout perspective. When we finish saving the task contexts, they are transformed into the state on the right side of the figure below. When we switch back to this task from another task, the CPU will read the same location and recover the task context from it.

The overall flow of __switch from the point of view of the contents on the stack: 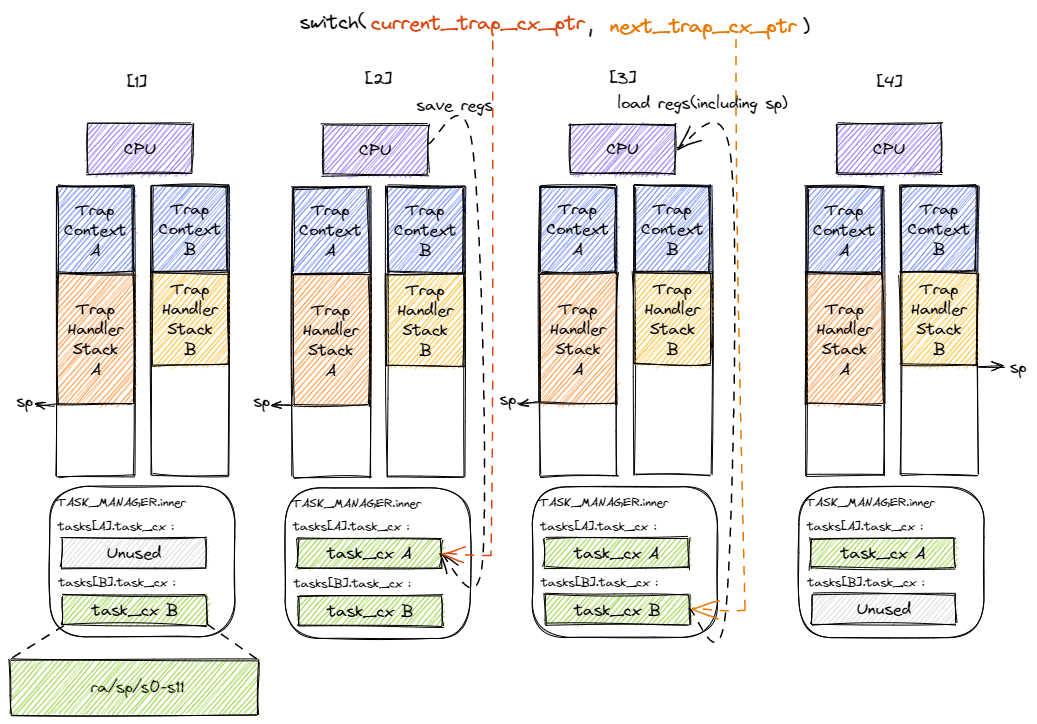 As a result, we see that the states of control flow A and control flow B are swapped, with A entering a suspended state after saving the task context, while B resumes context and continues execution on the CPU.

It is important to save ra, which records where to jump to after the __switch function returns so that you can get to the correct location after the task switch is complete and ret. For normal functions, the Rust/C compiler automatically generates code at the beginning of the function to save the registers s0 to s11 that are saved by the caller. However, __switch is a special function written in assembly code that is not processed by the Rust/C compiler, so we need to manually write assembly code in __switch to save s0~s11. There is no need to save other registers because: among the other registers, those belonging to the caller’s save are done by the code automatically generated by the compiler in the call function written in high-level language; and some registers belong to temporary registers, which do not need to be saved and restored.

We will interpret the global symbol __switch in this assembly code as a Rust function:

We will call this function to complete the switch function instead of jumping directly to the address of the symbol __switch. So the Rust compiler will automatically help us insert assembly code that saves/restores the caller’s save register before and after the call.

The core mechanism of scheduling lies in timing: we use clock interrupts to forcibly block the execution of user-state programs, thus allowing the OS to use the CPU and exercise its task management powers.

After an application has run for 10ms, an S privilege clock interrupt is triggered. Since the application is running at the U privilege and the sie register is set correctly, the interrupt is not masked, but jumps to our trap_handler inside the S privilege for processing and switches to the next application smoothly. This is the preemptive scheduling mechanism we expect.

We use a global task manager to control all the scheduling:

Besides, we implemetend a stride scheduler(see Refrence 2), which enables priorities in scheduling:

Note that in order to use alloc::collections::BinaryHeap, we have to implement the global allocator, which will be illustrated in next chapter, see the mm submodule for details.

We use the code provided by rCore-Tutorial-Book-v3 to test the stride scheduler:

The results are consistent with our prediction, with the running time of each program proportional to the priority.

All of the figures credit to rCore-Tutorial-Book-v3